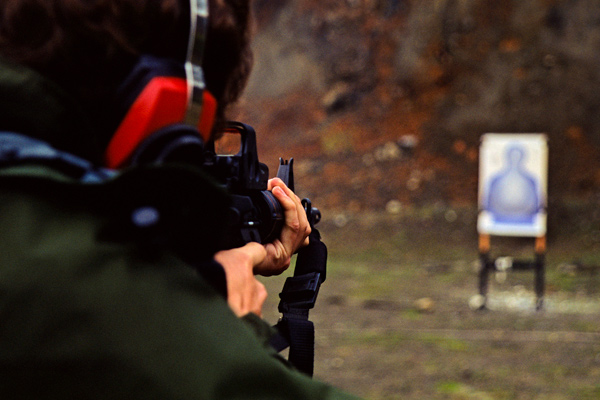 – Originally written while working as a Climbing Ranger in Yosemite National Park. –

My eyes were stinging from the pepper spray that was making the guy I was sitting on scream, and while I waited for Todd to come back from the patrol car I tried to remember exactly how it was I ended up doing this for a living.

I was just taking my first sip of coffee when the radio on my belt said something about a “suspicious person” in the Lower Pines campground. As a climbing ranger in Yosemite, my job usually dealt with ropes and granite cliffs, but that morning I was filling in as a shift ranger, keeping the peace in the usually peaceful Yosemite Valley. I had a variety of costumes in the closet: medic, fireman, rescuer, tour guide, and yes, cop. That morning I left the climbing harness behind, donning a gun belt and kevlar vest before grabbing a donut with my coffee for good measure.

When I showed up in the campground, Todd was already talking to, well, a suspicious person. Unlike the other campers sleepily cooking breakfast in nearby sites, he looked skittish, eyes darting side to side, hands twitching as he paced through his littered campsite. He was battling some inner demons, apparently losing the battle, and his hair style was painfully out of date.

When I joined the conversation, Todd was asking our new friend some questions, nothing rude, just friendly ranger stuff. You ok? Are you staying here by yourself? Actually, no, my name isn’t muthafuckinfuckface, what’s yours?  Well John, do you have any weapons on you?

That last question might seem a bit blunt, somewhat of a mood kill, but just like having the sex talk with your kids, weaponry is a subject that needs to be broached with every potential whacko. Unfortunately, just like sex, it’s a tough subject to slip casually into conversation. Nice weather, say, do you have a shotgun stuck down your pants? John didn’t like this line of questioning. At least that’s what I gathered from his lecture on the etymology of the word fuck.

“Wham!”  In my memory, we stared at the knife for about an hour before doing anything. It was one of those “time slowed down” moments you hear about in stories of disaster. I can still remember the freeze frame images of John pulling it out of his bag and slamming it into the table. The art director for Rambo would have rejected this knife as “over the top, no one will believe it.” I remember seeing something similar in the back of Guns and Ammo Magazine when I was twelve, and it was now stuck in the table between all three of us. In the millisecond of silence that followed before John got back to conjugating swear words, Todd and I both reacted with an unsaid “right, ok….”

Keep in mind, we’re standing in the middle of a popular campground in Yosemite Valley.  I later found out a minivan full of Asian tourists pulled up behind Todd and I in the middle of all this, camera’s rolling. Tourists or not, our conversation was going to change tone now that John had introduced a knife, or a small sword, into the mix.

Luckily for us, at the moment John didn’t really “have” his knife; it was stuck in the table, and he was busy with an impressively vulgar analysis of the US government. For the record, I actually agreed with some of his commentary, especially his concerns over fourth amendment privacy rights, or as he put it, “you gettin all in my shit,” but our views differed when it came to my relationship with my mother.

In a calm voice Todd suggested to John “How about you take a step back from the table.” John didn’t like this idea, and instead of backing up, he yanked his knife out of the table and waving it over his head started yelling phrases like “I’m gunna kill you.” The subtlety of such a comment leaves room for interpretation, but now we’re back in that whole “time slowed down” thing again. Guns drawn, everyone yelling, tunnel vision… Sometimes I forget what attracted me to this job, but this was most definitely not it.

In my college philosophy classes we used to debate hypothetical moral dilemmas: killing a few people to save a city from nuclear attack, weighing the life of an old man against that of a child with cancer. We covered huge ivy-league chalkboards trying to answer these made up questions, but we never actually tracked down a cancer victim or a drowning child holding a nuclear bomb to take things out for a spin. Standing there in that campground with my finger on the trigger, yelling at a crazy guy with a knife, I was finally putting my philosophy degree to good use. Hey Todd, do you remember the secondary quality value analogy for deontological consequentialism?  Do you think this guy might find the cure for cancer someday?

The next minute or so was a blur. As you might expect, philosophy took a back seat, and we played our cards according to tactical training. Thankfully John dropped his knife (threw it at the table actually), not a moment too soon, but then started rummaging through a bag on the ground. Now, as a lesson to beginner whackos out there, rummaging through your bag when two law enforcement officers have guns pointed at you is not a fantastic idea. If John stood up holding anything even remotely resembling something that might have potentially been what could have possibly looked like a gun, Todd and I would have been doing paperwork for weeks, and this story would have a different title.  Luckily, he instead pulled out a large, silver, old fashioned bike pump and began swinging it over his head while continuing to scream something vaguely related to current US tax law. Points for creativity, for sure, but why can’t Yosemite’s tourists be normal?

Feeling better about our respective fire power (guns vs. bike pump), Todd and I were able to widen the tunnel view a bit and get more creative. Guns are handy when you need one, but pepper-spray is far more useful when going up against a whacko with a bike pump.

Ever the consummate gentleman, Tod politely explained to John what was going to happen next.  “If you don’t put the pump down we’re going pepper spray you…  Alright, I guess we’re going to pepper spray you now.” After a few solid doses of triple hot papaya salad to the eyes, John was off and running.

Police work is always slick in movies, spinning taekwondo kicks and one punch knock outs, but in reality it’s more like a fourth grade playground.  As tourist families looked on while their pancakes burned on the camp stove, Todd and I eventually tackled John (dismissing the delicacy of compliance holds in favor of a lineman tackle), pinning him on the ground where he could continue cursing in peace, while I sat on him.

So there I was, sitting on a struggling handcuffed cursing crazy guy, trying to remember how I ended up with this job, and wishing I had been able to finish my coffee.

I’m glad that I finished that morning with the same number of bullets in my gun, but what really helps me sleep at night is the knowledge that somewhere in Asia there’s s a family showing their Yosemite vacation video to friends. On that video there’s a shot of a waterfall, a squirrel eating Cheetos, and some shaky footage of two guys with silly string chasing a blind man with a bike pump and a mullet around his campsite before sitting on him.