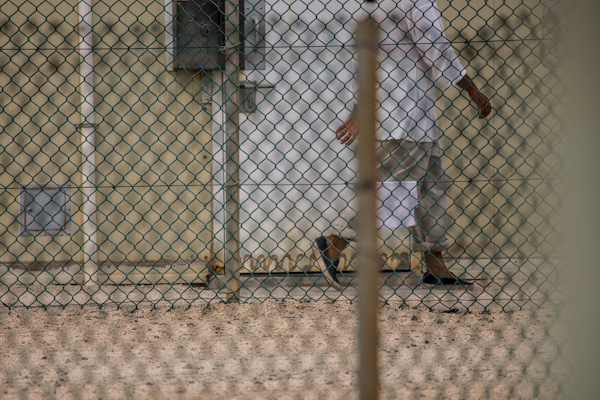 “Here, my friend, come, you ride with me.”  Mohammed slid a box off the bench seat of his golf cart and motioned for me to sit.  Our destination was not far, but rather than jog at his side in the mid-day heat of a “black flag” day I accepted his offer.  As we worked our way through the maze of chain link fence draped with sniper net, I continued to film Guantanamo’s librarian while he drove.

As we neared Camp 4 I stepped off and watched through the viewfinder as Mohammed maneuvered his cart through the outer gate and into the sally-port.  Stacked on the back were two plastic bins he had filled with books from the library that morning.  Following on foot, I continued to shoot, silently greeting the guards as they methodically locked the gate behind us.  By now these guards were familiar with our crew and barely acknowledged my camera.  After shuffling through his ring of oversized brass keys, Sally – the anonymous name given to any gatekeeper – found the right one, swung open the inner chain link divider and motioned us through.

Mohammed, a heavy set Egyptian with a broad smile, waved a thank-you and drove into the central yard, stopping his cart along the inner fence opposite a low building. As I stepped into the yard, camera off, my hand conspicuously placed across the lens, two dozen bearded men in loose fitting white clothes watched my every move.

As I approached Mohammed, a small group of detainees were speaking with him in Arabic through the fence and gesturing in my direction.  Mohammed was waving his hand casually and reassuring them.  “They don’t want to be filmed, but I said you won’t film the face,” Mohammed explained. Though our cameras had come and gone from this compound many times in the last two weeks, the reaction each time was varied.  With my hand still over the camera’s lens I looked at the men and nodded. They continued to speak in Arabic, sometimes to Mohammed, sometimes to me.  “It’s ok, it’s ok, you’re with me, it’s ok.  I can explain to them,” said Mohammed as he opened one of the plastic bins on the back of his cart.

One detainee separated from the group and moved toward me.  He was shorter than the others, with a gray beard, striking eyes, and a calm face.  He looked at me through the fence and said in stilted English, “Why should we trust you?” Whether or not detainee faces would be blurred after the fact was irrelevant – even if I were to explain this policy, why should this man believe it?  Knowing I was not to engage detainees in conversation, I simply nodded my understanding and indicated my wish to only film Mohammed. The man stood quietly looking at me, tilted his head slightly, nodded, and backed away.

Mohammed and the others continued their conversation.  Under their watchful eyes I once again looked through my viewfinder while Mohammed spread the day’s selection out on the back of his cart like a street vender: Barnaby Rudge, Harry Potter, Aesop’s Fables, Images of the Sahara.  Religious texts, American magazines, Arabic novels, a cook book…

One man motioned at an Arabic magazine.  Holding the magazine up to the fence Mohammed flipped through the pages until the man waved his hand and looked back at the cart.  Another spoke quietly and pointed to a book.  Mohammed removed it form the pile and carried it along the fence to a gate, slipping the book through a slit at waist level.  It was a photography book of African animals.

As I followed his movements through the camera, the group continued to talk to Mohammed, perhaps about the books, perhaps about me and my camera.  Glancing my way, one said in broken English, “always the same books, always same,” and walked away in exaggerated disgust.

Watching the world through a viewfinder creates a disconnect, a distance between yourself and the subject you’re filming.  Part of this is simply practical – shooting takes concentration – but part is intentional, the attempt to blend into one’s background as an unnoticed observer.

At Guantanamo this disconnect is continually turned on its head – fading, or evaporating all together. Over and over, the profound power of an image cuts through the technical distractions, leaving me as a fully present observer.  At other times the line between observer and participant blurs, then disappears.  Am I causing the event I am filming?

I was holding the camera low, looking at its small LCD screen and leaning on the fence so as to film Mohammed without including the faces of those with whom he spoke.  On the other side of the fence, immediately to my left, two detainees hovered just out of frame.  As I followed Mohammed’s movements on the monitor, it occurred to me that these two detainees were not watching him.  They were not watching me.  They were watching the LCD screen on my camera.

Just then another detainee joined the pair leaning on the fence.  After watching me for a moment, he asked in perfect English, “So, when is this program going to air?”