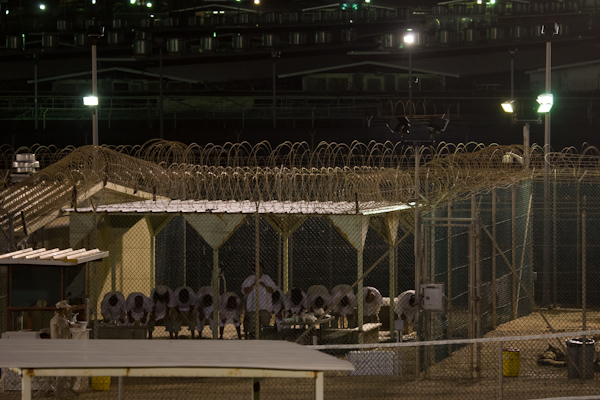 It was 4:30 am.  The sky was still pitch black overhead, but beneath me a sea of fluorescent light stretched into the distance.  I was alone in a guard tower overlooking Camp Delta – a sprawling mass of buildings, fences, and seemingly endless barbed wire.

The last nine days were a blur.  When I landed on a military runway the week before, the words “Guantanamo Bay” brought to my mind only vague notions of terrorism, intrigue, and controversy.  Now, looking out over that compound and sweating in the thick Cuban heat, my mind was overflowing with very real images – details – specific associations with what had once been merely a distant idea.

Moths circled a light tower to my left, casting shadows in the empty rec yard below.  A lone soccer ball sat near the middle of the open dirt square, surrounded by fenced off buildings.  Over the ceaseless hum of a distant motor, my two cameras quietly clicked every few seconds – a metronome pacing off the guards’ steps as they endlessly circled the fence line below.

On the far side of the yard, behind a layer of chain link and barbed wire, a door opened and a man in simple white clothes immerged into the dull light.  Soon other doors opened as more white clad men slowly gathered in a group at the end of the fenced off block.  One stopped to speak quietly with a guard through the wire; a brief greeting, and the guard continued his slow circle.

Surrounded by a sea of barbed wire, the men gathered under a thin metal roof and formed a line looking east.  As anonymous motors continued to drone in the distance, the men bowed their heads toward the chain link fence, and one singing voice floated over the camp.  Prayer call had begun.

Above all else, what strikes me about Guantanamo is the disconcerting way events here are able to appear both shocking and mundane in the same instant.  To my eye, every event – every detail – is powerfully significant, laden with meaning, yet these details have been here, occurring over and over, just the same, for years.

That which is extraordinary, over time becomes simply ordinary.  Gitmo embodies this bizarre relativity, moving the reference points by which we judge something to be completely normal or utterly alarming.

This is not the first time detainees have flooded their cell block; that is not the first cell to be covered in feces.  This librarian has passed countless Korans through countless cell doors into the hands of waiting detainees; he has blacked out thousands of newspaper headlines before this one.  These detainees will be back here tomorrow morning, surrounded by barbed wire, facing the eastern sky, praying to Allah.

The events I have seen here are among the most powerful and significant I have ever witnessed, yet they are simply what happens at Guantanamo – mundane daily occurrences in a fully extraordinary place.